(For those that are using marketing automation already, you don’t need to read this, unless you’re here to relish in your choice, than you’re excused to let out a little WHOOP!)

According to a poll conducted by Express in the UK, people feel guilty for a wide range of reasons:

While these all seem like small issues (which they are), missing out on the benefits of using marketing automation is real, it can be measured in dollars and all other currencies of your choice.

According to DemandGen Report, nurtured leads produce, on average, a 20% in sales opportunities versus non-nurtured leads.

Nurtured leads produce, on average, a 20% in sales opportunities versus non-nurtured leads

So let’s get started! The Top 10 Reasons why you should feel bad about not using Marketing Automation

It has already occurred. Many businesses, at least the ones looking to the future are currently using a marketing automation system. Not just a newsletter sending service but a full marketing automation system. One which includes features such as Landing Pages, Form Builders, Website Monitoring. This image below is from Ovum and their “Industry Adoption of Marketing Automation in Europe, December 2013” Report. The image above gives you a good idea on which industries are getting ahead, obviously the slowest adopters are governments. Don’t forget this report was from the end of 2013!

2. If you don’t, your competitors will

According to Apteco Ltd 33% of all businesses have already implemented marketing automation software within their businesses.

According to Apteco Ltd 33% of all businesses have already implemented marketing automation software within their businesses.

If you’re a business owner, then trying to see if your marketing effort are actually being rewarded can be difficult. Especially when there isn’t hard data to back up what your marketing people are telling you. This means you’re probably wasting hard earned money on marketing activities that aren’t working. According to Ascend2, 28% of all businesses using marketing automation say improving measurability  is the most important strategic goal.

Marketing Automation can help organisations improve their sales efficiency and overall organisational efficiency. Saving you time on repetitive tasks which can be automated. According to the Express Poll most UK residents seemed to feel guilty over things they didn’t have time to complete such as working out & calling friends and family. Maybe if they had a marketing automation system they wouldn’t have to feel guilty about not doing those things, because they would have time to do them? 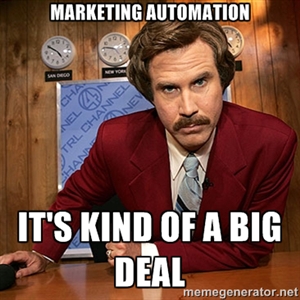 Your own next step in Marketing Automation?

If you think improving your online marketing is important for you, I would suggest you try out our very own 2-min test here from us at Sonician in order for you to figure out if Marketing Automation could be for you. You’ll find it directly at: www.sonician.com/survey/2mintest/

We recently closed a successful crowdfunding campaign via FundedByMe

We'd love to welcome you as a new share-holder as well. If you're interested, contact us directly. This is how the campaign looked like via FundedByMe:

Sign up for the Weekly Prospector — The Strategic Marketer